by Michael, Michael Mah, No Comments

by Michael, Michael Mah, Comments Off on Ed Yourdon Tribute

In remembrance of Ed Yourdon 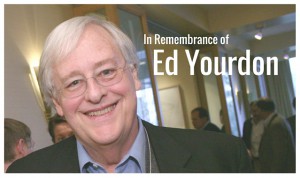 Ed Yourdon was one of my favorite professional “goduncles” for whom I felt a special kinship ever since we first met in my mid-20s.

Perhaps it was because of his kindness, or the fact that we were both native New Yorkers. Maybe it was also having studied in Boston at places like MIT and Tufts, or enjoying NYC street photography as a way of storytelling and observing life, which clearly is a key element of Humans of New York on social media. Perhaps it was that folks like us shared a passion to help change the world, or at least change the way our companies worked — to advance the betterment of our teams, our products, or society.

Whether it was some, or all of these, Ed was one of my most trusted mentors. I recall being terribly nervous about starting my own firm and consulting practice at the age of 27. I had no idea what I was doing, but Ed cheered me on. He told me that I had something valuable to say and encouraged me to take risks. It was because of people like Ed, Tim Lister, Tom DeMarco, Roger Pressman, and a small handful of “elders” at the time that I felt inspired to leave the relative safety of corporate life and venture onto the lecture circuit, writing and speaking about Big Ideas, whether it was about preventing “Death March” projects doomed to fail, managing the impacts of outsourcing/offshoring, measuring the success of teams and software project estimation, or getting far enough ahead of Y2K problems before they risked blowing up our collective faces, and, in more recent times, Agile methods.

That was what was so inspiring about Ed. A prolific writer with Big Ideas, mutual longtime friend Tim Lister once referred to Ed as “a man who has never had an unwritten thought.” Imagine how honored I felt when Ed asked me to write for his American Programmer journal. I was never more excited about making an impact. American Programmer would later become Cutter IT Journal, marking the beginning of my long, trusted relationship with Cutter Consortium and many former Yourdon Inc. thought leaders.

Long before TED Talks, for more than six years without fail, Ed and I would meet in Camden, Maine, over a beautiful autumn weekend where our colleague Tom DeMarco often served as master of ceremonies for the PopTech conference. It was a pilgrimage of Big Ideas, where we’d hobnob with folks like Bill Joy of Sun Microsystems, Carolyn Porco of JPL/NASA, John Sculley (former CEO of Apple prior to Steve Jobs’s return), and countless other leaders in the field. I’ll always remember sitting with Ed among the front rows, marveling at the implications of talks that unfolded around us, about which we’d feverishly write and expound upon as we continued our merry march through the lecture circuit.

I will miss the notion of sharing Big Ideas with Ed Yourdon. But most of all, I will miss his kind smile and gentle soul.

It is with great sadness that I am writing to announce the death of my incredible Dad, Edward Yourdon, on January 20, 2016.  He lost a brief but courageous battle with a blood infection that led to fatal complications.

My Dad is survived by his wife of 40+ years Toni, my brothers Jamie and David, me, his grandchildren Liam Christopher (13), Owen Edward (7), Edward Roland (“Teddy”) (4) and Elliot Ann (“Ellie”) (3) and his five sisters Toni, Teri, Tina, Aleda and Patrice.

My Dad had an amazing career and was an internationally-recognized expert witness and computer consultant who specialized in project management, software engineering methodologies and Web 2.0 development.  He authored over two dozen books. He was inducted into the Computer Hall of Fame in June 1997 with Bill Gates, among others.  He had IT fans and admirers all over the world.  On vacation as a child, I saw someone reading one of his books. When I told the person that the author was my father, they had ME autograph the book!  My father was generous enough to let me write part of a less technical book with him.  We were really proud of it and the book’s success.  I will always remember when he called me when I was on vacation to tell me our book had become a New York Times Business Best Seller.

My father constantly reinvented himself in his career and always achieved great success.  For the past 10+ years he was an expert witness at intellectual property trials.  He was proud to have my brother Jamie working with him and was proud of their professional relationship and success.  He was also proud to see David make a change in his career, and I know it must have tickled him to see both of his sons start to learn coding for their work.  I know he was proud of me for starting my own company.  Toni helped him run YOURDON, Inc. in the 1970s and 80s and I know he was proud of what they achieved together.  As my Dad’s career morphed, Toni was always there as his co-pilot publicly or behind the scenes.

He was a tech guy to the core.  He was the first to order every Apple product. When I recently told my son Liam that Grandad had the new Apple Watch, he rolled his eyes and said with envy, “Of course he does!”

For more on my father’s professional career, go to www.yourdon.com

My father was the smartest person I have ever known. He told us great stories about the pranks he and his friends would play at MIT- like dis-assembling someone’s car and then re-assembling it in their dorm room.  When we were repeatedly astounded by the millions of useless facts he knew, he always said he learned them in Humanities 101 at MIT.  He knew something about everything and a lot about a lot of things.  As you might expect, he was great at chess.  He was so proud when my brother David beat him in chess when he was a child.

In addition to writing technical books, my father also enjoyed writing and reading.  He was so proud of Jamie’s dedication to his own writing and thrilled for him that Jamie got his first book published.

My Dad’s partner in crime was Toni.  They were business partners, best friends and had a great love and personal respect for each other.  They travelled the world together and saw some of the earth’s great wonders in fabulous trips they took together.  We were lucky enough to have gone on trips together and enjoyed the fun with them.  Toni and my Dad went to high school together and always had a great banter about who had better grades.

My Dad had a passion for photography.  He enjoyed photographing his family, nature and people on the street (his “Peeps in the Hood”).  He would regularly go to photography workshops to improve his craft. When he would come to photograph my sons playing soccer he would whittle down the 900 photographs he would have taken to his best 15 or so. We have beautiful pictures of our friends and families because of him.  My father regularly had photographs published including having had a series of his photographs published in New York magazine.  Once he was hired to photograph New York Jets games, and he was amused to learn that the most-viewed photos in that series were his photographs of the Miami Dolphin cheerleaders!  My Dad would give little cameras to his grandchildren and allow them to walk around taking photographs at family gatherings.  My father has 50,000 followers on Flickr.

For more on my Dad’s photography, go to:

My dad’s grandchildren gave him great delight.  They each made him laugh a lot in their own special ways.  He made them laugh too.   He was very dedicated to them and went to a lot of different school and sports events and birthday parties.  He tolerated a lot of hibachi dinners with us too!  Luckily my father knew the Easter Bunny’s phone number, so there was always plenty of the right candy on Easter Sunday.

We are so grateful that we were all together during this most recent Thanksgiving.  My Dad loved his family and we loved him. He was taken from us too soon and we will surely miss him and his generous spirit, his great wit, his intellect and love of life.

In lieu of flowers, please make a donation in my father’s name to The International Center of Photography:

Please fill out all widget settings!